Black Cat Walking Under A Ladder

A would-be thief attempts to live a romantic life of crime, but after botching a job for the local syndicate, he finds himself on the run with his intended target — an underage call-girl. Lacking resources and connections, the pair plan a daring robbery to help secure their flight from the hostile city.

By turns both comic and tragic, the film will create a rich tapestry of the American Film Noir genre, French New Wave reflexivity, and Existentialist literature… all set to the cool sounds of hard-bop jazz.

This film was written and developed by Sean Corbett, to be directed by him. Projected running time is 80min, projected rating in North America is PG-13, intended to be shot on black and white in a 1.33:1 frame ratio. 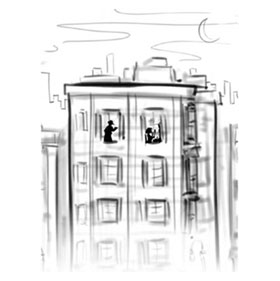 The cinematic medium is far from limited to words alone, nor does a story on screen necessarily develop solely based on plot. Since mood and tone are essential to the point of this project, we have created two demo clips that highlight our intentions.

Clips and music that inspired the script.

Some 16mm footage shot by us, to reflect the tone of the script.