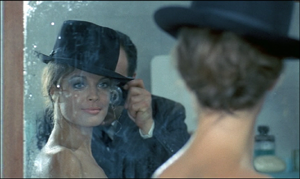 Claude Sautet mostly made (or was most famous for making) “domestic, bourgeois” dramas. He also made a handful of crime films. Max seems to be a melding of the two, almost perfectly. Up until the forty minute mark or so, it was almost boring, almost too slow for a noir. Too plodding, maybe. Too stunted.

Melville made an art out of the stilted confines of the genre and its types. His poetry started as soon as reality ended. Sautet is making a Melvillean film in some respects, but it becomes best when the characters are allowed to live and breath outside the noir elements: a cafe balancing act, a junkyard break to lounge on a ratty sofa tossed in a field. The second best thing about Max is how we hang out with the would-be robbers while they loaf and dream and pester each other. A crime film becomes a touch too suspect, in my opinion, when it goes to great lengths to show us how “normal” and “nice” at heart the criminals actually are. This film never does that. But it does get very close to who they are in the great realm between ticks and story function. It is commonly called “actor’s business”, and — for an amateur director — is the most oft overlooked or ill handled part of mise en scene. Amazing how the directors accused of sometimes being too staid (Sautet, Rohmer… to name a few) are always the ones who shoot with deceptive simplicity to allow the actors to perform at a level never bettered outside their oeuvre.

One more aside before I get to the point. Compare two beautiful touches of scenery that unfold into “business” in Melville’s Le Samourai vs Sautet’s Max: Jef’s perfectly stacked and always in stock water bottles on his dresser (one of only 3 major touches in that set), then the casual bottle of beer waiting on Abel’s bedside dresser, with opener conveniently laid beside it. In the Sautet film every set is littered with the knick knacks of everyday life (another perilous navigation for the amateur) yet things like the beer bottle stand out. And for no story purpose of their own. They are the characters, not as symbols, but just as they are — objects. Cinema allows objects to become talismans of Being, fully contained not just within the story but within the moment. This is where the life in cinema comes from. This and the actors-as-objects: their eyes, their hands, their smiles.

One quarter into Max, the film comes into its own. Romy Schneider and Michel Piccoli share screentime alone, and pull the movie wide awake. A domestic dance of the sexes is where Sautet excels, and he marries it so completely with the rest of this film that it can only be marveled at and enjoyed. Obviously Piccoli is making a play against the gang when he singles out Schneider as his mark, but it was not initially apparent (at least to me) how he would go about it. The delicate game of manipulation is what is essential to the plot and what gives the story its perfectly apportioned suspense, but it (like the other noir elements before) only exists as a matter of course. It is the interplay between the actor and actress, given a large chunk of screentime, that forms the heart of the movie.

It is best, I think, to look at it like a workplace romance. He has a very specific job (beyond her comprehension) and she has a very straightforward job (fully within his comprehension), and their initial interactions play out along these lines. But after the few tiny dictates of story are taken care of, the quips and glances and body language give off a spontaneity I have never seen before in a crime film. It is not the spontaneity of Godard, where anything could (and did) happen. This spontaneity takes place within almost suffocating confines of established character, situation, and story structure. Which makes it all the more amazing.

Piccoli never checks out Schneider’s reaction while he is deftly planting information to entrap her and her boyfriend — he is already sure of that. But when she loses herself in the moment, actually enjoying herself, and starts sotto counting in German as she deals cards, that’s when we get a reaction shot of Piccoli. That’s how Sautet handles the HUMAN interaction of the thing. That’s what allows it to build to a later kiss that would have been telegraphed and cliched in any other rendition, and then onto a much emptier and tragic ending than would have been possible had it just stuck to the numbers.

It’s funny how the numbers or the genre expectations or whatever are always actually more ridiculous in the great films. Around poor films made by hacks for hacks, one most often finds the excuse “at least the story was interesting” (or its slightly more impotent cousin “it was actually based on a true story”). I like to think of these as movies better told as a capsule synopsis by a co-worker during a break than full two-hour time investments. They have to get the basic story and motivations clear, because there ain’t much else to it after that. Piccoli’s failed-judge past, or the string of perfect near-coincidences that lead to the playing out of the robbery set-up exactly as planned wouldn’t sound near as well if one had to pitch them in two sentences or less. And I just proved it.

But having Schneider’s character play upon the actress’ own nationality (I can’t remember now if she was German or Austrian in the film, but the point is the outsider coming into France) would not have been used by a lesser director, much less used simply for character’s sake. It’s damn romantic, like the subplot itself. A sexless romanticism made all the more ludicrous (and therefore allowing every exchange to be all the more hyper-real) between a gorgeous young prostitute and a corrupt cop of lavish private means. It sounds so silly to write and read it like that. This is the beauty of cinema; if it feels perfect as text one might as well burn the paper and save the cash. I can only wonder how Claude Sautet must have put his performers at ease, to help them escape beyond the merely good. To allow them to do it in such a fun film. It should be seen and noted, again. And again. And again…